Since that time I have tried many tools/editors to build web pages the “easy way”. Starting with FrontPage (are you old enough to remember that??), MS Word, MS Word simplified HTML, Website Baker and more, including WordPress.

Each tool left me dissatisfied. The HTML code was heavy, there were limitations on what one could actually do with the created page, the resulting web pages didn’t actually resemble the WYSIWYG editor’s version (especially with Word) and more.

WordPress was actually unique in that it ALSO allowed you to get hacked quite easily. It was roughly 10 years ago that we spent a lot of time fighting hackers out of our sites, and then we actually got paid to do the same for others who desperately needed to reclaim their sites.

You could lower your risk somewhat by updating WordPress frequently but it was an annoying and technical process that most people would not be very excited about doing on a regular basis.

I was not a big fan of WordPress.

But then things changed.

First of all WordPress got their act together, presumably sensing that if they didn’t fix their issue with getting hacked then the whole planet was going to say bye-bye to WordPress. Upgrades became possible with a mouse click, and now just happen by themselves.

Secondly, the templates got good, and current. You want a theme that has all the latest bells and whistles, plus the tech stuff to keep up with mobile-friendliness and constantly changing technical standards? Just update your old theme to the latest version or pop in a new theme if necessary.

My wife Sara annoyed me recently — there was a certain technical issue with one of her sites. Instead of researching it and coming up with a technical solution (she IS a programmer, after all) she said “I’ll just get a WordPress plugin to do it.” And she did, in a matter of minutes!

Ok, “offended” is a bit too strong, but something just didn’t seem right about that. I would have done it the “right” way, spending 2 days looking into the problem. Eventually I would come up with a patch that represented the closest I could get to a full solution to the problem based on the mixed, incomplete information I had found online. It wasn’t fair that Sara could wimp out (in geek terms) and have a great solution in minutes!

Then it happened to me.

I needed to put some kind of anti-spam on a form on a small, old, and unimportant site of mine which was built the hard way with HTML. I went to put on a Google reCAPTCHA thing, having done that before. But I was having a lot of trouble figuring out how to implement the new reCAPTCHA version 3.

I realized that in the time it would take me to figure it out I could convert the entire site over to WordPress, customize it, and pop in the reCAPTCHA WordPress plugin. And I would have a better, more attractive and technically up-to-date site.

That finished my conversion to WordPress.

Truth is, I have been using WordPress more and more anyway to take advantage of the great themes that are available. They are better looking than anything I can do myself and come mobile-friendly, so I don’t have to spend days testing every little thing in every possible screen width.

But I finally realized that WordPress also has an almost-instant solution to my technical issues, in addition to my design issues.

I admit it — WordPress is smarter than I am. Time to put it to work.

And my advice to you is to learn WordPress if you have not done so already. If it is good enough to convert a tech-geek like me with 20 years of misgivings about using tools for building web sites it is probably what you need to.

By the way I still don’t know how to add the version 3 reCAPTCHA to an HTML web site. I can live with that, if you know what I mean. 😉 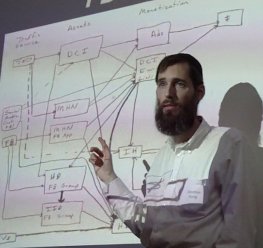 Seth has 20+ years experience in web development and online marketing. He also teaches, online and off, in a variety of venues. Click here to learn more.